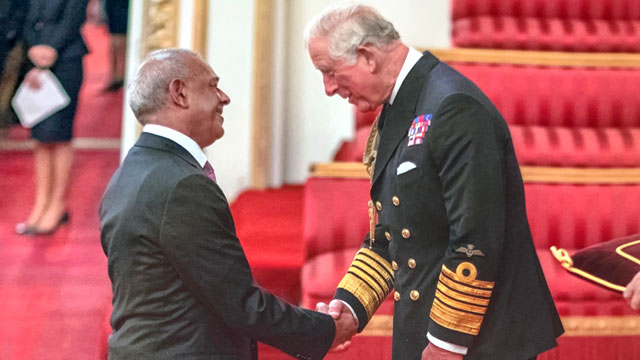 Park Garage Group director Balraj Tandon recently received his MBE from Prince Charles in recognition of his services to business and the south London community.

The 59-year-old emigrated to the UK as a refugee from Uganda in 1975 with his family and has built up the family businesses to the extent it is now ranked seventh in the Forecourt Trader Top 50 Indies with 49 sites.

Balraj said his parents would have been “absolutely overjoyed” at the news, particularly given the award “came from the Queen”, adding: “We are royalists and we love her so much.”

He began working at his local petrol station with his father and from this single petrol station built Park Garage Group which has an annual turnover of £200m.

He is a trustee of the Friends of Baale Mane, which was founded in 2001 to combat child labour for girls in Yeshwanthpur in India.

He is also lead trustee of the Hindu Society Centre in Wandsworth, which promotes the Hindu religion and looks after south London’s Hindu community.

This website uses cookies to improve your experience while you navigate through the website. Out of these, the cookies that are categorized as necessary are stored on your browser as they are essential for the working of basic functionalities of the website. We also use third-party cookies that help us analyze and understand how you use this website. These cookies will be stored in your browser only with your consent. You also have the option to opt-out of these cookies. But opting out of some of these cookies may affect your browsing experience.
Necessary Always Enabled
Necessary cookies are absolutely essential for the website to function properly. This category only includes cookies that ensures basic functionalities and security features of the website. These cookies do not store any personal information.
Non-necessary
Any cookies that may not be particularly necessary for the website to function and is used specifically to collect user personal data via analytics, ads, other embedded contents are termed as non-necessary cookies. It is mandatory to procure user consent prior to running these cookies on your website.
SAVE & ACCEPT